I have some very exciting news to share: The COSMIC LOVE comic anthology inspired by the music of Florence + The Machine is finally launched on Kickstarter! This means that during the month of February (2019), people have the opportunity to order a copy of Cosmic Love (and possibly pick up some other rewards too) and help Red Stylo reach its goal of $4,000 to cover the cost of printing the book and bringing the idea I pitched over a year ago to full fruition!

So, I want to share with you some of my process in creating the 7 illustrations I contributed to Cosmic Love and tell you a bit more about the project.

What is COSMIC LOVE?

Cosmic Love is an eighty-page comic anthology inspired by the music of Florence + The Machine. It consists of 6 different stories by teams of writers and artists. I contributed illustrations for the title pages of each story as well as the cover illustrations for both the main and variant editions.

How did this come to be?

Sometimes I still wonder how this all worked out. It's one of those dream-come-true scenarios that all happened so fast it's practically a blur. It all started about a year and a half ago at Baltimore Comic Con (which happens to be my favorite comic con). I had a table next to Red Stylo Media, who publishes comics and anthologies on a yearly basis. Their anthologies usually revolve around themes and they have a growing collection of books inspired by music. I had been a fan of their work and known a few folks who have contributed to them. There was nothing but good things to be heard about Enrica Jang (founder) and Red Stylo!

They had recently published a comic anthology inspired by Lana Del Rey, titled Baroque Pop. I saw this and thought that a Florence + The Machine inspired title could be a fitting follow-up. I was encouraged to share this idea with them, despite my nerves about giving an unsolicited suggestion. To my great surprise, Enrica loved the idea and she immediately called the main editor, Jennie Wood, who also loved the idea. They said it could be the next year's music anthology, that I would be involved, and that they would be in touch by the end of the year! I could hardly believe my ears. I didn't want to get too excited until their email arrived in my inbox. Just like that, the gears were in motion! Enrica and Jennie have a lot of experience at this point and have a good system down for getting stuff done!

Why Florence + The Machine?

I am a big fan of Florence + The Machine. I just saw them in concert for the first time last year and it was everything I had hoped it would be! Florence does not disappoint. In terms of why I thought it would be a good fit for Red Stylo, I thought it might attract some of the same fans who enjoyed Baroque Pop and I knew that Florence's lyrics and music allowed for a lot of emotional connection and interpretation. There's a lot of imagery and symbolism in those songs! I thought this would be fun for writers and artists to work with and with Red Stylo's love of unique stories, it seemed to be a match made in Heaven---I am so happy they agreed! (Enrica and Jennie are both fans of F+tM as well!)

Who is the creative team?

Rachel Perciphone (myself) illustrated the covers and interior chapter vignettes.

Enrica Jang is the lovely founder of Red Stylo and Jennie Wood is also the editor of the book.

Here are the seven pieces I created for COSMIC LOVE: 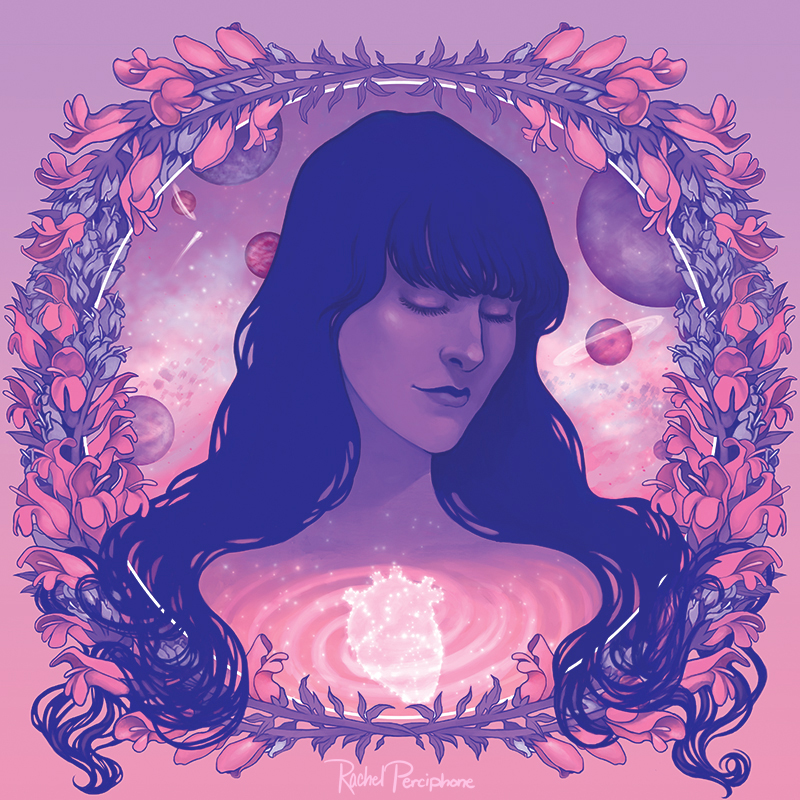 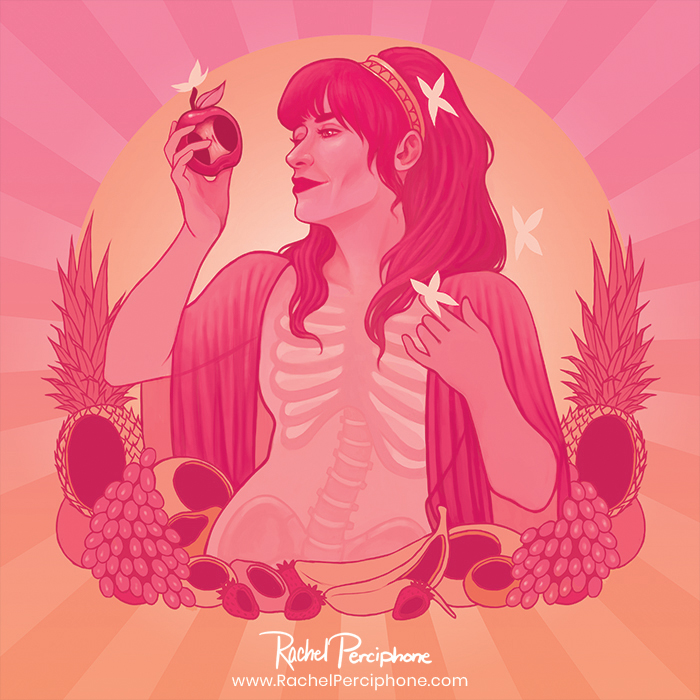 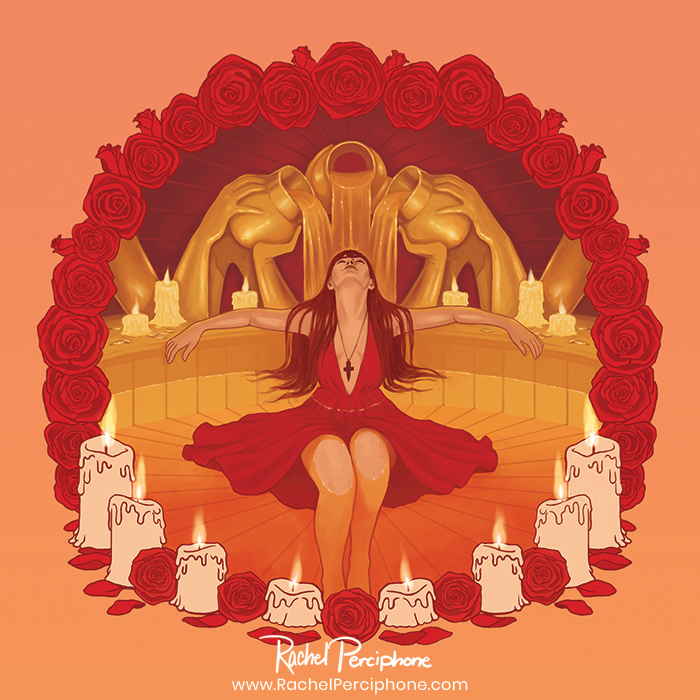 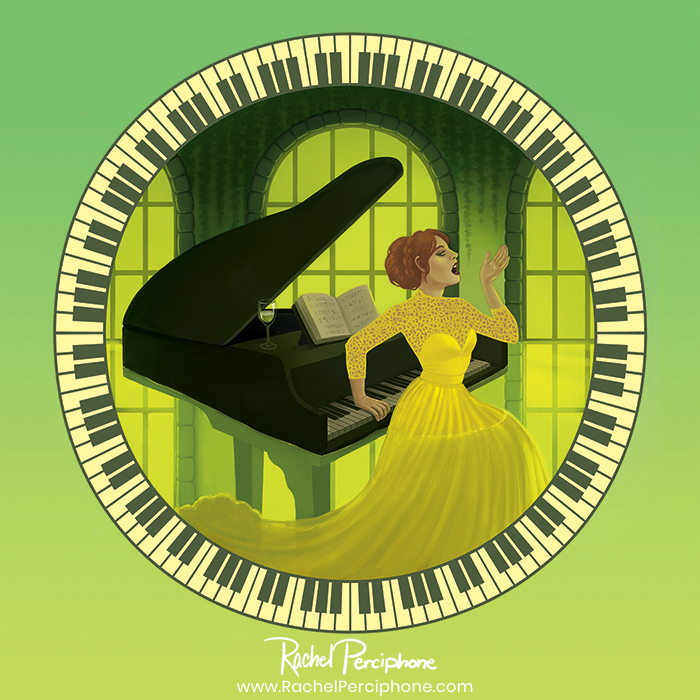 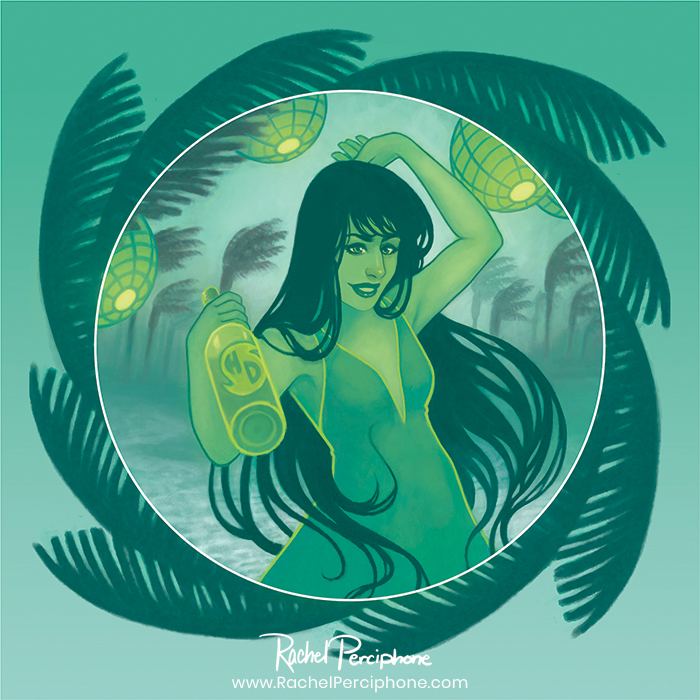 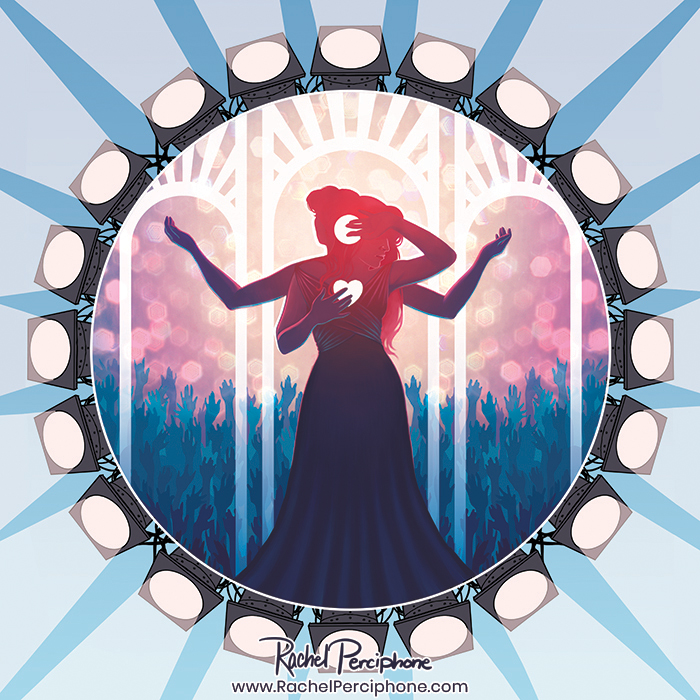 I started out with some very small, very loose "scribbly" sketches on a piece of printer paper as I listened to the music (over and over and over). I didn't think too much about it and just went on instinct as ideas popped into my head for each song.

Then, I'd take the ideas I liked most and would flesh them out in a bigger sketch on its own page in my sketchbook (or in Photoshop). I'd still work fairly loosely; arranging shapes and elements until I had the complete concept. The next step is to take reference photos or gather reference from online resources.

From there, I'd begin the final drawing... Some drawings were created in pencil on drawing paper and others were drawn with my tablet.

After scanning in my pencil drawings, I begin working out the rest of the foundation (composition, drawing, value, colors.) Because I painted these digitally, it afforded me the ability to try things out, change my mind, and fuss with the colors and values easily. So there's a bit of a second rough stage when I work out the values and color palette before committing and getting down to the nitty gritty of painting detail.

Once the foundation is set, I start painting things in: starting with "washes" of color and establishing the lights and shadows. I build up the detail and contrast as I go and I usually find opportunities to add extra elements, like the moths/butterflies you can see in Sweet Nothing, that tie everything together.

Lastly, I'd like to thank Red Stylo for believing in this idea and for giving me the opportunity to help bring it to life along with the incredible team they put together. I had a lot of fun creating the art and I made some new friends along the way! Red Stylo delivers fresh, out-of-the-box ideas and gives old stories new twists. They give new creators, stories, and ideas a chance to shine and I am always excited to see what they come up with next!

If you have the interest and the means, please consider checking out the Kickstarter to order a copy of the book, or to help spread the word so that others can see this project (LINK)

You can find more information about Red Stylo and their other publications at www.redstylo.com

Thank you for taking the time to read this blog post and for your interest in my art!

Extra thank you if you checked out the Kickstarter, pledged, or helped spread the word.

For more updates, you can follow me on social media: